The killer boats were out in Taiji last night on the night of the Full Moon, known as The Hunter’s Moon. They went into formation and herded 60 – 120 (conflicting reports of numbers as the Japanese do not like us to know what is going on) pilot whales into the Cove. There, in water too shallow for them, the whales await their fate.

Whales are in danger anyway at the time of the Full Moon as their feeding habits change and they can get stranded on beaches.

The International Whaling Commission was founded in Washington USA in 1946. Some of the larger species of whales are protected but the hunters have turned to the smaller ones like the pilot whales  The organization “Whales Alive” raises awareness about endangered whales and monitors activities that threaten them.

I found out this information from them as my knowledge of the intricacies of CFCs was minimal.

As a species, humans cause insurmountable problems for ocean life, even without hunting them. We have brought about the destruction of the ozone layer and climate change, have polluted the oceans with toxic waste and ruthlessly fished.

The damaged ozone layer takes its toll. Scientists found that there was a hole in this protective layer in 1985. That must have been a scarey realization. I think I would have got the shivers if I had been one of those scientists. It was our species orchestrating this depletion in the layer by our use of CFCs which are chloroflurocarbons.These are what the energy converts to when we burn fossil fuels  such as coal, oil and gas.The effect that this had was to increase the levels of ultraviolet B that could access the earth’s surface. This has a bad effect on all ecosystems.

Apparently those organisms that are most affected by UV-B are the lowest on the food web. It has decreased marine phyloplankton which is the basis of the marine food chain. This has a domino effect of reducing food supplies to those animals higher up on the food chain such as whales as there is less food to go round.Not only do these  marine phytoplankton (microscopic plants) act as a food source at the very bottom of the chain, in the Southern Oceans, they are the leading lights the climate change scenario. They naturally break down carbon dioxide through the process of photosynthesis. The affect of the reduced number of phtyoplankton because of global warming means that there will be excess build up of CO2 so  the warming process will accelerate and Earth will literally cook itself.

We are seeing the effects of climate change in our weather systems. The tiny change that starts at the bottom of the marine food chain will work its way through the thread that powers this planet and affect everthing and everyone as we are all entangled. No phytoplankton, no tiny fish, no whale, no  human, no family, no community, no region, no nation, no continent, nothing on this planet is an island.

It would seem that us humans have the anti Midas touch.

So those poor pilot whales managed to survive the eco damage that we have instigated but unfortunately they were in the wrong place at the wrong time last night (morning in Japan) and they will pay the ultimate price for that as unless a miracle happens, they will end up in the Japanese food chain.

Not exactly having  a whale of a time..

All we can do is sign petitons, make calls, raise awareness and record these things. 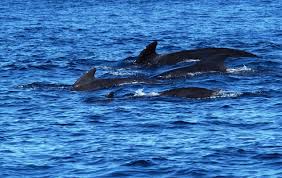 People have been joining in for a nightly visualisation to protect Taiji Cove whales and dolphins.

Update 30/10/12 night : Unfortunately half of the whales are being brutally slaughtered now. We tried to get it aired on the BBC and tweeted Japan but we were powerless Please Tweet @JPN_PMO ” I oppose pending slaughter of 100-120 pilot-whales in Taiji” Sea Shepherd monitoring Over 100 Beautiful, Intelligent Pilot Whales are to be slaughtered NOW! this is so WRONG! #tweet4taiji HORRIFIC 11,000 people tell #BBC to cover the atrocities in #TheCove http://t.co/PWHgfLHI where is the #media? @SeaShepherd #Tweet4Taiji The slaughter of dolphins and whales is happening NOW! Shame on you Japan. Support the guardians of the cove @SeaShepherd.@callofthecove @CBCNews @SeaShepherd Yes please cover the story URGENTLY- All the Whales will face a certain agonizing death we NEED UR HELP RT @seashepherd pod throwing themselves on the rocks!water so shallow#pilotwhales.!”worse sight ever” Whales crying splashing Taiji: many pilot whales struggling to fight for last breath.Baby caught in nets. So brutal & words can’t describe this horror #tweet4taiji

Above are some of the agonising tweets and information coming through from the Taiji Cove Guardians who monitor these killings to make the world aware. This must be stopped.

Update from Taiji Cove on morning of 31/10/12 – Over 10,000 supporters followed our livestream coverage of today’s slaughter & #tweet4taiji was trending on Twitter! Thank you

Hello. I am a Registered Hypnotherapist, Reiki Master in the Usui/Tibetan Ryoho Tradition and a Certified Animal Reiki Practitioner. I have given Tarot and Psychic Readings for over 30 years. I have an MA in Psychoanalysis after studying language, symbols, dreams and the unconscious. I founded the School Of Wyrdynamics SOW, which is a school of thought whose intention is to study wyrd and patterns in my own and others' life unfoldments in order to create a healthier and more fulfilling life by maximising choices and positive potentials. Apart from above, other interests are Sociology, Quantum Physics, Qabalah, Ritual and Magickal Theory, Gematria, Animal Welfare and causes...To Be or Not to Be You. That is the Quest and I have lots of tools to help you to uncover and direct your patterns to become the best you.
View all posts by rosedixon →
This entry was posted in Animal Work, Taiji Cove and Related Information, Taiji Terror Tales and tagged animal welfare, climate change, Death, Full Moon, japan, Mother Nature, Taiji Cove and Related Information, Weather, web, whales. Bookmark the permalink.