Taiji Cove – A Drop in the Ocean. One lone newborn calf sent back to sea by killer boats

It was a dramatic day for the monitors at Taiji Cove today. The killer boats split into two groups. One group successfully drove a small pod of Risso dolphins into the Cove. The pod fought bravely but were unable to escape and the net was positioned to block their escape.

The second pod fought and managed to outmanouevre the boats. For this we are thankful.

The first pod included a mother and her newborn calf. The tarpaulins were raised and about 7 dolphins were slaughtered. Two “lucky” ones were chosen by the hunters to be saved and handed over to the trainers who gave them a hearty meal of dead fish in harbour sea pens. How bloody civilized to be offered a meal after you have just witnessed your pod which is the equivalent to a human family for you, being killed an hour earlier. Come on, eat up, we have saved you. Now all you have to do to earn more dead fish to keep you alive is to entertain humans in dolphin shows to make us a profit. Plenty more fish in the sea. It won’t miss one ot two.

Things like this are sickening enough to monitor online let alone be there as a Cove Guardian. They are there to report on the atrocities and bring the information to the rest of the world. A lot of people think that this practice ended after the film “the Cove” was released but this is not so.

One of tonight’s tweets from Save Japan Dolphins Taiji Cove monitors was:

“#Tweet4dolphins
Tarps up at killing Cove.. Our legs shake as we watch the fate of these poor dolphins including a mother and baby”

They can only watch to report. They cannot take action to defend the dolphins. The police are there to protect the fishermen. Unbelievably, tourists are often present watching the live entertainment.

The story did not end there today. The picture above is of the skiff which took the lone newborn calf and dropped it out to sea. Initially it was hoped that they would have the sense and decency to drop the mother off with it. But of course they did not because the mother was worth money to them. The lone calf might have stood a small chance with its mother. Without her it has no chance. So if you are tempted to think that the hunters were showing compassion, think again. Think money.

There is some good news on the horizon though. ABC Channel 7 in Northern California will be airing an investigative report (with footage!) on Taiji’s Dolphin and Whale slaughtering http://abclocal.go.com/kgo/index

The tide is turning for the cetaceans. The barbarity must be stopped. 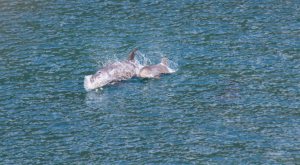 Hello. I am Reiki Master Practitoner and Teacher in the Usui/Tibetan Ryoho Tradition a certified Crystal Healing Practitioner and Meditation Teacher. I have given Tarot and Psychic Readings for over 30 years. I have an MA in Psychoanalysis after studying language, symbols, dreams and the unconscious. I founded the School Of Wyrdynamics SOW, which is a school of thought whose intention is the study wyrd and patterns in my own and others' life unfoldments in order to create a healthier and more fulfilling life by maximising choices and positive potentials. Apart from above, other interests are Sociology, Quantum Physics, Qabalah, Ritual and Magickal Theory, Gematria, Animal Welfare and causes...Be The Change You Want to SOW
View all posts by rosedixon →
This entry was posted in Animal Work, Dolphin, Taiji Cove and Related Information, Taiji Terror Tales and tagged Death, dolphin, Taiji Cove and Related Information. Bookmark the permalink.

1 Response to Taiji Cove – A Drop in the Ocean. One lone newborn calf sent back to sea by killer boats