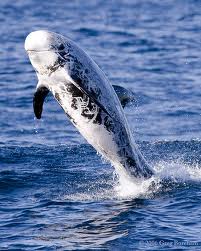 Unfortunate events unfolded at Taiji Cove this morning. The boats were returning to the harbour emptyhanded when one of crew spotted a small pod of Rissos swimming very close. They radioed the other hunters and they drove them into The Cove. The tarpaulins were erected swiftly and the whole pod was slaughtered. These dolphins had no chance. The hunters use banger poles to make a lot of noise which confuses the dolphins. They are terrified and swim away from the noise and the boats drive them into the Cove and put nets up which the dolphins see as a solid barrier. They were slaughtered immediately and their bodies were taken by skiff to the butcher to be packaged. Sea Shepherd Cove Guardians livestreamed the process which took about 40 minutes approximately from start to finish. That is very quick as the drive can take hours.

There is some good new in these early hours. The Sunday Times online has an article about Taiji

Hello. I am Reiki Master Practitoner and Teacher in the Usui/Tibetan Ryoho Tradition a certified Crystal Healing Practitioner and Meditation Teacher. I have given Tarot and Psychic Readings for over 30 years. I have an MA in Psychoanalysis after studying language, symbols, dreams and the unconscious. I founded the School Of Wyrdynamics SOW, which is a school of thought whose intention is the study wyrd and patterns in my own and others' life unfoldments in order to create a healthier and more fulfilling life by maximising choices and positive potentials. Apart from above, other interests are Sociology, Quantum Physics, Qabalah, Ritual and Magickal Theory, Gematria, Animal Welfare and causes...Be The Change You Want to SOW
View all posts by rosedixon →
This entry was posted in Dolphin, Taiji Terror Tales and tagged dolphin, japan. Bookmark the permalink.