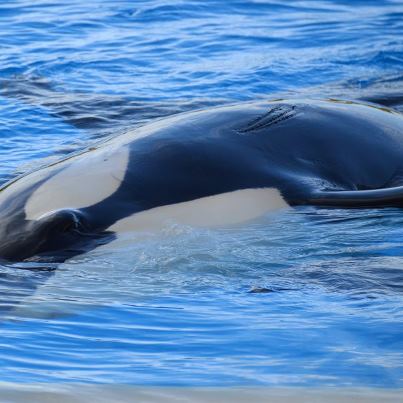 “Morgan is a young female orca, or killer whale, who was captured in the Wadden Sea, off the north coast of the Netherlands, on June 23, 2010. Orcas live throughout the world’s oceans, but are rarely seen in the Wadden Sea; the last recorded sighting off the Dutch coast was in 1947.

Morgan was taken to the Harderwijk Dolfinarium in the Netherlands. She was fed fish and given antibiotics. On June 29, the dolphinarium announced that she would have to stay in captivity for 3 to 6 months. On July 5, it was announced that she was in good health.

On August 3, the dolphinarium invited the public to see Morgan. Throughout the summer, and until the facility closed for the season in late October, visitors streamed in to see Morgan, who quickly became the star attraction. She was advertised on the dolphinarium’s website, and she attracted many visitors. The nearest captive orcas in Europe are in Antibes, France, more than 1000 miles away.

Estimates of Morgan’s age when captured range from 2 to 4 years. She is still young for an orca. However, there is no evidence to suggest that she would not be able to survive in the wild. There are two other cases of young orcas, Springer and Luna, who were both separated from their respective families at less than two years of age. Springer and Luna, who came from resident orca families that spend summers in the coastal waters of British Columbia and Washington state, were fully able to hunt for themselves. Therefore, the evidence shows that Morgan would also be able to catch her own fish.

Orcas are intensely social creatures. In many populations, they stay with their families their entire lives.  European orca populations are spread across the waters off the UK, Ireland, Norway and Iceland. There is also a group which lives in the Strait of Gibraltar.

Researchers are confident that Morgan belongs to a Norwegian population of orcas, based on her distinct vocalizations” from Free Morgan Foundation

If you look at the photograph above, which was sent anonymously to the Free Morgan Foundation, you can see some injuries. It was hoped that this beautiful orca would be released but the court ruled during the past month, that she is to stay in captivity. The campaign to free her will continue and I will be following the story in 2013.

For more information go to

Hello. I am a Registered Hypnotherapist, Reiki Master in the Usui/Tibetan Ryoho Tradition and a Certified Animal Reiki Practitioner. I have given Tarot and Psychic Readings for over 30 years. I have an MA in Psychoanalysis after studying language, symbols, dreams and the unconscious. I founded the School Of Wyrdynamics SOW, which is a school of thought whose intention is to study wyrd and patterns in my own and others' life unfoldments in order to create a healthier and more fulfilling life by maximising choices and positive potentials. Apart from above, other interests are Sociology, Quantum Physics, Qabalah, Ritual and Magickal Theory, Gematria, Animal Welfare and causes...To Be or Not to Be You. That is the Quest and I have lots of tools to help you to uncover and direct your patterns to become the best you.
View all posts by rosedixon →
This entry was posted in Animal Work and tagged animal welfare, Free Morgan The Orca, Morgan the Orca, Mother Nature, whales. Bookmark the permalink.