I went to the Japan Dolphins Day Protest in London yesterday. Once gain there was a good turnout. Everyone there used their voice for the dolphins and the imminent 2013-2014 drive hunting season. We all dread it. That is why we convened. We spoke to passers by and gave them leaflets and several drivers showed their support by hooting as they passed by.

For me, the highlights of the day were:

There was a one minute silence for the dolphins. The Embassy must have wondered what was going on as we were all using whistles and shouting before that. Then there was silence. Sometimes silence says more than a million voices talking. We say “Never Be Silent. Never Give Up” . The silence produced a gap in the text, as and it must have seemed like someone had hit the pause button from the point of view of the Gaze of the Embassy. It was the Zero Point which says that anything can stop. Anything can change. We offered them Silence, a Gap, an Opportunity. Cross the gap, cross the chasm, come over to us and see how it looks from our standpoint.

We were offered beautiful red roses so that we could all take one and place it in the centre of the road. Tokens of our love for the dolphins. Roses are a symbol of love and the day was Friday, under the rulership of Venus. In myth, Venus/Aphrodite was born from sea foam. One of the Venus symbols are Roses. The word for Friday in most Romance languages is derived from Latin dies Veneris or “day of Venus. So apt to offer roses with love.

There was a wonderful lady there called Santy who addressed the Embassy in Japanese. She was carrying a banner which said “Taji, please stop killing dolphins and whales. No matter how hard you try to hide your bloody crime, I still know. We all know and the world is watching”

Santy spoke to the Japanese Embassy in Japanese too.

We all signed a petiton which was handed in to the Embassy. 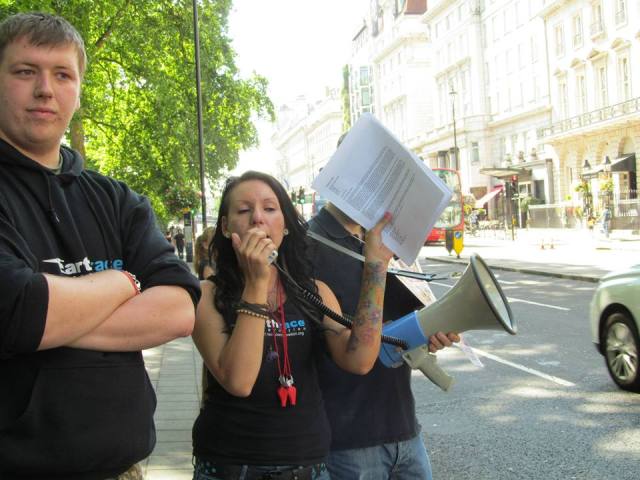 There were some brilliant banners like this one made by some young girls. I love those words. Youngsters just get to the point and say it like it is. For me, there is a ot of wisdom in their words.  When dolphins are driven into Taiji Cove, there is a selection process. Certain dolphins are selected for captivity, to be trained for human entertainment and are unceremoniously torn away from their family. They are placed in sea pens for their training and then transported to dolphinarium. They are forced to live in very tiny quarters with traumatised dolphins from other pods. The rest of the pod who are not deemed suitable for captivity are brutally slaughtered. “This is not a Pick & Mix. It is a serious matter of life & death” Brilliant words.

Earthrace have made a brilliant poster. Each cross represents a cetacean that has died in captivity. There are 5500 crosses and these are the ones that they know about. The ones with the blue markers represent baby dolphins. This image is very powerful because it gives you a sense of the scale of the exploitation. It is a silent image that speaks volumes to the heart and makes you shed a tear, many tears for each life lost.

This image speaks volumes and is a tear jerker. We cannot think of Taiji without sadness. At the moment it represents so much that is wrong with our world. The symbolic Taiji colours are red and blue. When the Cove is blue we do not feel blue but relief and joy. When it is red, our eyes become red from crying. The tears that we shed are our way of cleansing the blood from the Cove.

There were other protests including one in Japan. These people are so important. Change must come from within Japan. 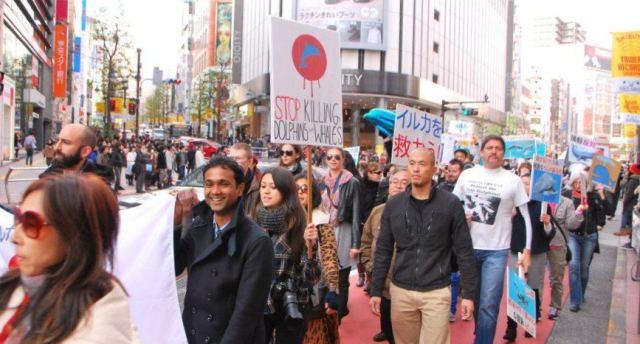 A plea from Sea Shepherd to the drive hunters

Hello. I am a Registered Hypnotherapist, Reiki Master in the Usui/Tibetan Ryoho Tradition and a Certified Animal Reiki Practitioner. I have given Tarot and Psychic Readings for over 30 years. I have an MA in Psychoanalysis after studying language, symbols, dreams and the unconscious. I founded the School Of Wyrdynamics SOW, which is a school of thought whose intention is to study wyrd and patterns in my own and others' life unfoldments in order to create a healthier and more fulfilling life by maximising choices and positive potentials. Apart from above, other interests are Sociology, Quantum Physics, Qabalah, Ritual and Magickal Theory, Gematria, Animal Welfare and causes...To Be or Not to Be You. That is the Quest and I have lots of tools to help you to uncover and direct your patterns to become the best you.
View all posts by rosedixon →
This entry was posted in Dolphin, Environment, Taiji Terror Tales and tagged dolphin, Dolphin Show, dolphinarium, Earthrace Conservation, Japan Dolphins Day London 2013, Roses. Bookmark the permalink.