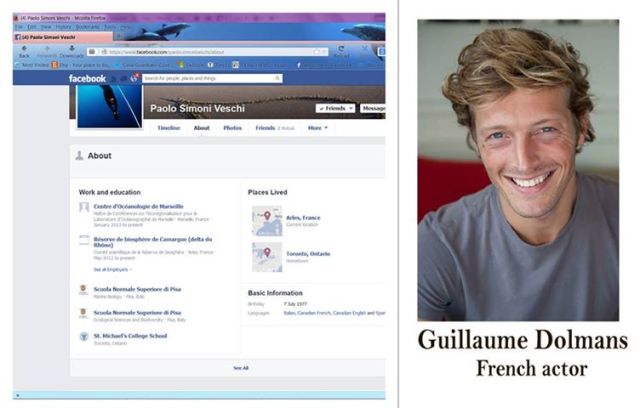 We are all aware that the internet and social media networking sites are not foolproof and that people make fake profiles or present themselves in any guise that they want. The marine animal protection sector has been the target of such an individual who managed to befriend people and gain admittance to groups who are campaigning against Taiji drive hunting, whaling and the cetacean captivity industry.

Soemone called himself (or themselves. It is a possibilty that there was more than one person behind this..) Paolo Simoni Veschi. He claimed to be a marine biologist living in France with Italian origins. Over a year he successfully befriended many marine activists and animal activists. There was a profile for his so called girlfriend too under the name of  Opis Opi.

He used pictures of the French actor Guillaume Dolmans pictured above on the right. It gave him an appeal, certainly to women.

He requested to be facebook friends with me too but I always thought that his pictures looked a bit too polished, too perfect and indeed they were, as they were of the actor, Guillaume Dolmens, obviously taken by a professional.

“Paolo” put a lot of effort into this and a lot of time. The truth about him has not been unveiled. Was it just the work of a lonely individual who wanted to amuse himself by deceiving people? Was it someone who wanted to infiltrate the animal activist groups as we do share a lot of contacts and discuss a lot of campaigns?

He seemed to have a lot of information on the captive cetacean industry notably about Morgan and Tilikum, the captive orcas.

If more information about him comes to light, I will post it here. Will the real Paolo Simoni Veschi please stand up? Who are you? Do you have other aliases? What do you really think about cetaceans and captivity?

Part of me is wondering whether this was a psychological study on how people can build fake personas on social networking sites and that we should expect “Paolo” to make an appearance in an academic book or on TV at some time in the future.

Who knows? Well, as “Paolo”he has been rumbled…

Hello. I am a Registered Hypnotherapist, Reiki Master in the Usui/Tibetan Ryoho Tradition and a Certified Animal Reiki Practitioner. I have given Tarot and Psychic Readings for over 30 years. I have an MA in Psychoanalysis after studying language, symbols, dreams and the unconscious. I founded the School Of Wyrdynamics SOW, which is a school of thought whose intention is to study wyrd and patterns in my own and others' life unfoldments in order to create a healthier and more fulfilling life by maximising choices and positive potentials. Apart from above, other interests are Sociology, Quantum Physics, Qabalah, Ritual and Magickal Theory, Gematria, Animal Welfare and causes...To Be or Not to Be You. That is the Quest and I have lots of tools to help you to uncover and direct your patterns to become the best you.
View all posts by rosedixon →
This entry was posted in Uncategorized and tagged Guillaume Dolmans, Paolo Simoni Veschi. Bookmark the permalink.