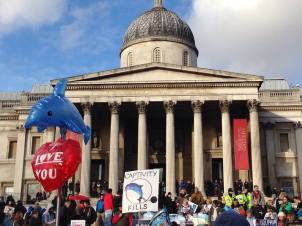 The march started in Cavendish Square in Central London and ended at a demo in Trafalgar Square. There was a brilliant turnout. People raised awareness through chants and banners and leafleting. It is always very moving and very motivating to link with like minded people. It was so good to be in Trafalgar Square at a protest for the dolphins and whales. It feels good to live in a country where there are no longer any dolphinariums but it does not feel good to be a member of a species that inflicts so much suffering on animals and the environment.

I loved this “Je suis dolphin” banner and it was nice to see other banners with “Je suis Tilikum” and “Je suis Corky”and “Je suis Morgan”. There may have been others that I did not see as there were a lot of attendees. There are so many other names that could have been displayed.

All of the captive orca and dolphin stories are distressing. I posted about Corky a while back as it broke my heart to hear her story. She proved that whales are intelligent social creatures with strong family bonds.

Maisie Williams who plays Arya Stark in “Game Of Thrones” was there for the dolphins and  these three animal campaigners gave excellent speeches to educate and motivate the crowd.

Sharon Bull read a poem which she had written from Angel which was very moving. This is a good way of educating children about the plight of Angel and her species as they will be able to identify with Angel. It is not madness to attribute human emotions to dolphins as it is acknowledged by scientists that they and whales live in families, use language and form strong emotional attachments. It is so crucial to reach children so that they know not to visit a dolphin show.

You can listen to Will Traver’s inspiring speech here:

You can listen to the motivational words of Dominic Dyer here

It was so poignant that this march and demo took place tday as it is one year since Angel the albino was brutally taken captive by the Taii drive hunters. I posted on here at the time about it:

So what can we do to bring this barbaric enterprise to an end? We can carry on protesting and educating people as this movement is gaining momentum. There is another protest outside the Japanese Embassy on Friday February 20th. Follow the link for the details:

In the meantime you can do this:

Prince William is going to be visitng to  Japan shortly so you can ask him to request that Taiji stops the brutal drive hunting. I quote from today’s Telegraph

Kensington Palace said in a statement that the Prince would travel to Japan first and attend a number of events in the capital, Tokyo, and other areas on behalf of the Government.

These engagements would be “focused on UK-Japan relations, commerce and cultural exchange and in support of his own personal interest in combating the illegal wildlife trade.

Hello. I am a Registered Hypnotherapist, Reiki Master in the Usui/Tibetan Ryoho Tradition and a Certified Animal Reiki Practitioner. I have given Tarot and Psychic Readings for over 30 years. I have an MA in Psychoanalysis after studying language, symbols, dreams and the unconscious. I founded the School Of Wyrdynamics SOW, which is a school of thought whose intention is to study wyrd and patterns in my own and others' life unfoldments in order to create a healthier and more fulfilling life by maximising choices and positive potentials. Apart from above, other interests are Sociology, Quantum Physics, Qabalah, Ritual and Magickal Theory, Gematria, Animal Welfare and causes...To Be or Not to Be You. That is the Quest and I have lots of tools to help you to uncover and direct your patterns to become the best you.
View all posts by rosedixon →
This entry was posted in Animal Work, Dolphin, Taiji Terror Tales, Tilikum Terror Tales, whales and tagged blackfish, Corky the Orca, Dolphin Captivity, Dolphin Show, dolphinarium, Empty The Tanks, Free Lolita, Free Morgan The Orca, Seaworld, Taiji, Taiji Cove and Related Information, Taiji Terror Tales, The Cove Documentary, trafalgar square. Bookmark the permalink.